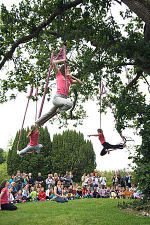 Clonmel may not be on most peoples’ list of places to visit when they’re planning a trip to Ireland, but sometimes a good festival is enough to make you change your plans. Celebrating with a local community – or even just watching them celebrate – makes a vacation unique and interesting, and helps you get to know a place a little better. So, why not join in the fun of the Clonmel Junction Festival?

First held in 2001, the Clonmel Junction Festival incorporates art, music, theatre and dance in both traditional and more avant-garde settings. The festival takes over the town of Clonmel for its run every July (usually eight-nine days), with performances in the streets as well as performance venues, so it’s impossible to be in Clonmel during the festival and not get into the spirit of things.

Each year the Clonmel festival has a theme – in 2007 it was “Travel and Transport,” and that was worked into every facet of the festival. There’s an effort each year to engage younger audiences, and in 2007 kids were encouraged to think about transportation in different ways. Art installations around town featured the “Travel and Transport” theme as well, although most of the theatre, dance and music performances were not tied to the theme.

While the Clonmel Junction Festival might seem like a mini-Fringe festival (like that in Edinburgh each summer), it’s probably more accurate to call it a local arts festival – this isn’t a party the residents throw for tourists, it’s a festival they put on for themselves. That makes it all the more interesting if you’re an outsider, of course!

The festival runs each July, and starting in June tickets are available for booking online, by telephone or in person in Clonmel. You can find out more about advance booking here, and the official Clonmel festival website is here.