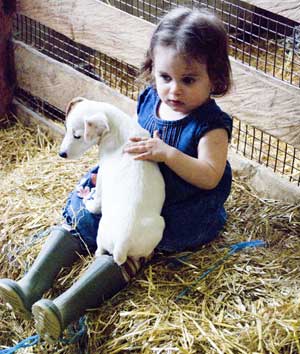 On Saturday we did something we’ve been meaning to do ever since the munchkin started pointing at furry four-footed creatures on the street and shouting, “DOGGIE!!!” we took her to the Glendeer Pet Farm, a child-oriented petting zoo just outside Athlone in County Roscommon.

The pet farm is one of the few in Ireland set up for a real hands-on experience with a wide variety of animals. Located just off the N6 motorway, it’s definitely worth a stop if you’re travelling with children on the Galway – Dublin route and are looking for a family activity to break up the trip.

Your €7/person admission gets you two brown bags of animal feed and access to a mostly free-ranging population of exotic and domestic animals.

The main building doubles as an ticket counter and cafe and once you purchase your tickets you continue through the dining area out past a number of pens, the first of which occupied by a very friendly emu who will, if you’re not carefull, take the entire brown bag of animal feed like a muzzle and, turning its head skyward, try to gobble it down as most of the contents rain down around its head.

The first few pens include a number of friendly goats, ducks, turkeys and geese. Past this initial area you can see a children’s play area to your right with swings, tyre swings, a see-saw, a pair of zip lines and a frightening home-made slide towering over everything. 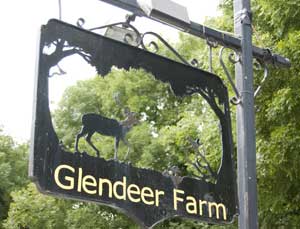 Chickens, sheep, a pair of llamas, a large brown pig, a donkey and numerous other friendly creatures have free reign over the premises while other possibly more shy (or aggressive) creatures are kept safely in their pens. Among those in pens are deer, ostrich, ducks and peacocks as well as a variety of birds and colourful grouse.

Inside a massive barn is the real pleaser for small children: puppies, rabbits and friendly goats as well as a huge variety of exotic-looking chickens and doves take up one area while in the next is a massive sand box with diggers, shovels and wheelbarrows.

We didn’t check out the full 6 acres of farm, which includes a nature walk, as the approachable scale of our outing was somewhat limited by the length of the munchkin’s legs. From her toddler’s perspective, the best part of the Glendeer Pet Farm were the free-ranging chickens, llamas, the swings, frightening slide, massive sandbox and the puppy pen.

Glendeer is open from April through September and opens again for the month of December as Santa’s Lapland village, complete with live animal nativity scene, santa’s village, real, live reindeer and, of course, the big jolly man himself.