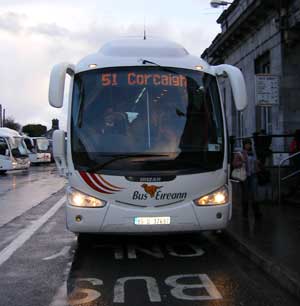 For years the busses in Ireland, if they were posh enough to have robotic voice warnings, had very British-sounding robot voices. “Cah-gao d’oh oop’neen” a deadpan London female would say every time the luggage doors opened.

Well, a recent trip on one of Bus Eireann’s vehicles demonstrated that the Irish bus company decided that a local accent might be a better idea.

Yes, I’ve heard that they do – those darn luggage stores.

Now, I’m not clear on what EXACTLY is being said, but as I heard the warning repeat throughout my recent trip I began to vasselate between “luggage doors operate,” (they sure do) “luggage doors in operation” or “luggage doors operating.” Whatever it’s actually saying, it’s an improvement on the distinctly un-Irish robot warning they used to have.

Sorry for the wind noise, but have a listen for yourself and tell me what you think it’s saying.