The 2008 DeLorean – buy your own Irish time machine 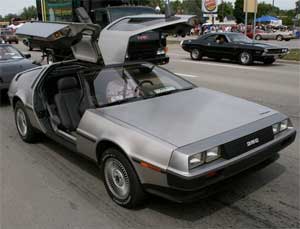 Fire up your flux capacitors, folks. The DeLorean Motor Company has announced that the Irish car made famous in the Back to the Future movies will be going back into production this year with new DeLoreans rolling off the line in late 2008.

The new cars will maintain the same design as the original, but with an updated engine, and loads of modern amenities like an iPod dock built into the dash.

And if you should want your DeLorean to travel in time?

Well, you wouldn’t be the first one to pump 1.21 gigawatts into your gull-winged sportscar.

A rabid fan completely recreated the time-traveling DeLorean and sold it on eBay recently. So, somebody out there actually bought the whole DeLorean time machine.

Some other guy actually manufactures and sells just the flux capacitor.

Another guy has done a website on how to build your own flux capacitor.

Meanwhile, in the world of real science, someone has just proven that time travel is possible. One catch: the theoretical machine proposed would not allow folks to travel back to a time before the machine was switched on. So much for the plots of Back to the Future 1 & 3.

Back to the car itself – the company only rolled about 8,000 cars off the line before closing. Parts were made for 21,000 cars though and the Texas company that purchased the name & rights has been quietly using those spare parts to build “new” DeLoreans and fix up old ones. One of those will run you around $40k and can be ordered from the DeLorean website.

Flux capacitor, of course, not included.