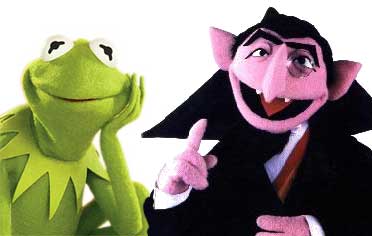 I had posted a while back that I would love to audition for the Irish Sesame Street, but my lack of Irish prevented me from doing so.

Well, some good friends of mine have been on to me since and, with their encouragement and expertise as gaeilge, I have submitted my application to be one of the Sesame Street characters.

My attempt at doing so is a recording of a conversation between Kermit the frog and Count VonCount.

I wrote the script in English on Wednesday (I thought it up while putting my toddler to bed, actually). My idea was that Kermit would be doing something like MTV cribs where he went to visit the Count’s castle – but the “crib” in question was actually the Count’s childhood crib. I was told that this would not translate well into the Irish.

So, instead the Kermit is working for a program called an comhairle and is simply interviewing the count at his castle. So today I had the translation read to me and I spent a few hours this afternoon desperately trying to

Not an easy task, gentle reader, I can tell you.

In any case, it is done. You can listen to my audition where Kermit interviews the Count here.

For those English speakers amongst ye, here’s the original script I wrote in English:

Kermit: Hi-ho! Kermit the frog here for an comhairle Sesame Street. Today we’re high in the Carpaggian Mountains where we’ll be talking with Count VonCount. The Count, as you know, is called The Count because