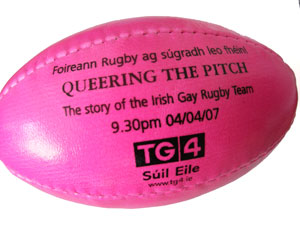 Given that this arrived the week before April Fool’s day, when one of the sport guys came in chortling and tossed the object you see on your left there over to me I really, honest and truly, thought it was an April Fool’s joke.

“Wow,” thought I,“for a corporate station, TG4 has really got an amazing corporate culture to conduct such an elaborate April Fool’s Day joke – sending pink rugby balls to all the sports newspaper editors in the country!”

Oh my friends, that might be a hot pink novelty rugby ball promoting a documentary of Ireland’s only gay rugby team – the Emerald Warriors – but it is not a joke.

Say what you like, the Irish grip on its sense of humour is a strong one, folks. That is a brilliant title for this documentary.

The Emerald Warriors website is here and TG4 is here.

Did I mention the miniature hot pink rugby ball?