Members of the company trickle into the hotel lobby and are greeted with complimentary mulled wine.

Most wisely avoid this and purchase a beverage of their choice at . . . 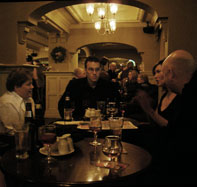 At the bar, employees do what they do every day – sit down with their coworkers. Only one significant change: this time there’s drink involved.

Now the socially lubricated coworkers file into the dining area where the hotel will serve up several courses of food. Littering the tables are party hats, confetti and the traditional Christmas crackers. The drink starts to take effect and normally stoic relations loosen enough to allow the occasional racy joke or inadvisable comment. Helium balloons are emptied into lungs. Party hats are donned at improbable angles. 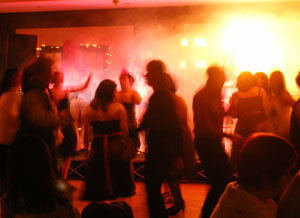 A fog machine goes off and the band takes the stage in white jumpsuits and, with strangely affected Swedish accents, begins a litany of crimes against pop music. The dance floor is crowded within seconds. 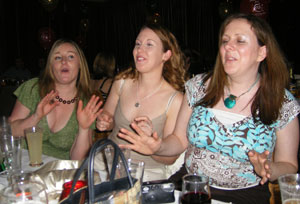 Yes, the rumours are true: the Irish like to sing when they’ve a few drinks in them.