The best fish and chips in the world

Back in the day, way back in the early 90s, before Galway vomited up miles of suburban tract homes into her hinterland, the charming little fishing town of Galway had a most noble fish and chip shop called McDonagh’s fish and chips.

A much younger version of myself stood at the counter and saw the staff changing their sales chalkboard to reflect what fish had been caught that day. After ordering fresh cod and chips I turned to a framed letter on the wall to my left that had cyrillic writing at its top. Intrigued, I leaned closer to read the official letter from the Admiral of the Russian navy. The letter stated that in all of the Russian Navy’s illustrious travellings, they had never chanced across a better plate of fish and chips in the world. So highly did they esteem McDonagh’s in fact, that they had drafted this official naval letter to that effect. 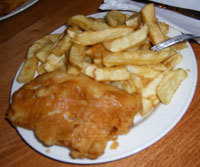 I have good news: McDonagh’s abides. Usually crowded and always delicious, this is THE place for fish and chips. I myself have had fish and chips around Ireland (Burdocks in Dublin DOES deserve an honorable mention here), the UK, the USA, New Zealand and Australia – in my humble opinion, I agree with the Russian navy:

McDonagh’s is the best fish and chips in the world.