Plan a Layover in Iceland 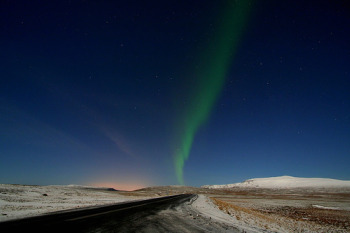 The small island country of Iceland sits just between Europe and the US. In fact, most international flights between the two continents fly over (or very close to it) the country. If you book a flight on Icelandair or Iceland Express though, you can actually stop and visit Iceland, for no extra change.

Well…there might be a slight extra charge for those coming from Ireland. You see there are no direct flights from Ireland to Iceland, but if your travels will first take you to Amsterdam, Glasgow, London or Frankurt (among other destinations) you can easily plan a quick stop in Iceland on your way to the US cities of New York, Boston, Orland, Seattle, and (soon) Washington DC or Chicago.

Flights to Iceland from London take just 3 hours (with the flight to the US averaging around 5 hours) so you can even head over for a long-weekend before returning to Ireland. There are dozens of reasons to visit Iceland now – including the fact that winter is low season and prices on flights, tours, and hotels in Iceland are much lower than during the summer high season (by as much as 50%).  Plus, despite the country’s name, the weather in Iceland isn’t as bad as you might think, especially around the capital of Reykjavik, which enjoys a jet stream effect than ensures relatively warm winter temps. On average, the climate in Iceland isn’t any colder than that of New York City, and most of the attractions and activities that draw people to the country – natural wonders, geological oddities, horseback riding, caving, trekking, hot springs and the Northern Lights – can be enjoyed year round.