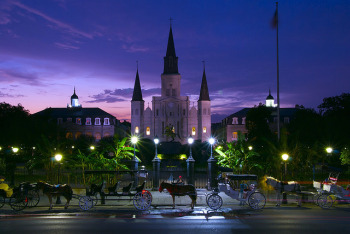 Five years ago this August, Hurricane Katrina tore into the Gulf Coast of the US, hitting hard the city of New Orleans, and causing significant damage to other states in the Gulf region. People across the world watched in horror and the people of New Orleans lost their homes, their possessions, their livelihoods, and for too many, their lives. Five years later, there is still much work to be done in New Orleans, but the city is recovering. The joyfull spirit of the Big Easy prevails, and tourists are heading back to the city.

But just as New Orleans and the rest of the Gulf Coast seemed to be getting back on their feet, another disaster struck the Gulf. This time it was oil that caused the damage – to the Gulf, to the area beaches, to the people working in the fishing industry, and to the fragile tourism industry in the region. Despite the still-unknown future ramifications of the Gulf Coast oil spill, now is a great time for visiting the Gulf Coast. Many of the beaches are still in pristine conditions and open for swimming. Volunteer opportunities abound on other beaches, and in many areas, the best attractions are off the beach anyways.

With tourism down, many hotels in New Orleans and other areas are offering some of their lowest rates in years. Bourbon Street’s still the place to party, the beignets are still soft and sugary and the bartenders at Lafitte’s are still ready to pour you a Hurricane and tell tales of the bar’s former incarnation as a pirate’s secret stashing place. So grab some cheap tickets to New Orleans – there’s never been a  better time to come.