Sleep in the Former Home of Merv Griffin in Galway 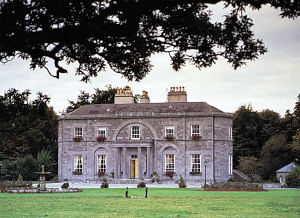 Most of us have dreamed at one time or another of rubbing elbows with the rich and famous. It’s one of those things that is unattainable for all but the very (privileged) few, right? Well, yes and no – if, for instance, you want to brag to all your friends that you’ve been a guest in a home owned by the late Merv Griffin, that’s as easy as renting a room at St. Clerans Manor House in Craughwell, County Galway.

See, when you’re rich and famous you get to do things like buy castles and historic homes in far-off places, restore them to their former glory, and then either live in them or turn them into five-star hotels. In Merv Griffin’s case, he said that buying St. Clerans Manor House was a “long cherished dream” – but he didn’t keep this treasure to himself. Instead, after St. Clerans was restored Griffin opened it up to guests as a luxurious hotel.

In fact, before Griffin owned St. Clerans, this 18th-century Georgian house was the home of famous film director John Huston. It was as a guest of Huston’s that Griffin first saw the property, and then when the house was put up for sale in 1997 he fulfilled his dream of owning it himself. He had a very active role in the renovations and decoration, personally choosing most of the decor in each of the rooms. 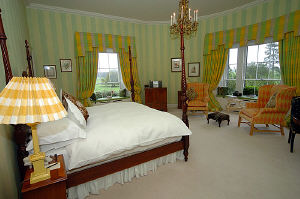 St. Clerans is considered a boutique hotel and has only 12 rooms, and the house itself is set on 45 acres. Personal attention is at its highest here – in each room there is a “bottomless” decanter of Port, and at Christmastime each room gets its very own tree. Not far from the main house there is even a stand-alone guesthouse called the “Angelica Suite” after the former owner John Huston’s famous actress daughter. If you want to really surround yourself with history, however, you’ll want to stay in the Griffin Suite – so named because this was the room Merv himself stayed in whenever he came to Ireland. It also happens to be the same room that Huston lived in during most of his time at St. Clerans.

Now, a night in this place doesn’t come cheap – but if you’re intent on getting close to the rich and famous, you’ve got to shell out a little bit of cash now and then. Besides, there are plenty of reasons to splurge on a night or two in this luxurious hotel – weddings, honeymoons, second honeymoons, anniversaries – you name it, you can probably make up an excuse to stay at St. Clerans and let yourself be ridiculously pampered for a little while.

And while you’re there, offer a little silent thanks to Merv.