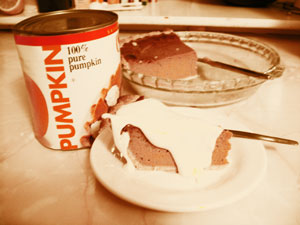 Well it’s Christmas time again and we expatriots drag out our trusty culinary traditions, much to the amusement and confusion of the local Irish folk.

One of the things we indulge in that causes the most bewilderment and consternation is Pumpkin Pie.

In the case of Pumpkin Pie, it’s no wonder. Pumpkins aren’t easy to grow here and, in fact, they were just about impossible to find in Ireland until a few years ago. Now, my mother used to go down to the supermarket, buy a can of pumpkin and make a pie. The first two years here, wifey had to do something I have never seen anyone in the states do – make a pumpkin pie from scratch using an actual pumpkin.

For those who are interested, it’s quite difficult to get the same consistency and firmness from pumpkin flesh than it is from the canned stuff. The pie tends to be a lot more wobbly (it barely holds together, actually), and the preparation time is significantly increased. Maybe it’s just one of those I-grew-up-with-it-this-way-so-that’s-how-I-like-it, but wifey and I encouraged our family and friends stateside to send us tins of pumpkin and have used that ever since.

The Irish experience with pumpkins in any shape or form is extremely limited, though they always mention having heard of pumpkin soup (something I’d never heard of).

Their response to the pie is usually one of delighted surprise as they discover it’s a sweet, mousse-like dessert dish and not some horrible savoury vegetable concoction in a pie crust. As word of her baking mastery has spread, wifey has actually been commissioned to produce pies for several friends here.