Worst winds in a while 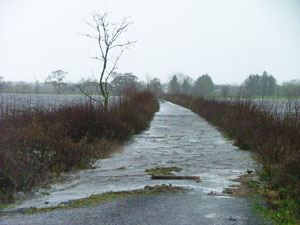 RAINY IRELAND: One of the local roads that flooded.

I was almost blown over this weekend. I thought perhaps it was worse here in Athlone, as the Shannon often creates a kind of micro-climate.

Seriously, there were two foot waves crashing the wrong way over the weir wall of the river in the middle of the Shannon. I wish I could have taken some pictures, but the weather was just too bad to head over to the river banks with a camera, I’ll see if I can’t get some of the water level tomorrow. I know of several large trees around here that were blown down, there were many roads flooded (like the one in Clonown there to the left), one family had a giant trampoline flung through its roof and the river authority reported winds at 48 knots. 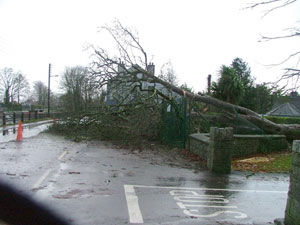 It wasn’t just the midlands. These winds are the worst Ireland has seen in years. I’ve been reading the news and woe betide those who attempted to get in or out of Ireland this weekend. Dublin airport reported gusts up to 150kph and hundreds of flights were cancelled. The ferry services into the country were cancelled altogether. Trees uprooted, bridges burst and there is flooding throughout the country but, surprisingly, there were no reported deaths this weekend other than a fisherman who was swept out to sea.

Here is a link to a national story on the winds.