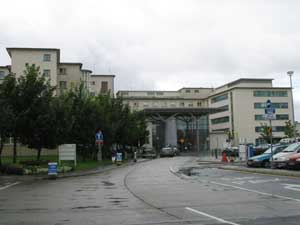 Every winter in Ireland the winter vomiting bug strikes. When wifey was pregnant with the munchkin, she caught it (a dangerous prospect for a pregnant mother). Just last month the sister and I ended up in the hospital with it.

I was just reading that Galway hospital has closed four wards this weekend due to vomiting bug cases. Portiuncula and hospitals in Dublin have experienced this in the past as well. The vomiting bug is particularly awful for a hospital, as it passes very easily from an infected host. It lives for a while outside the body and can be caught from fleeting contact with a doorhandle or a sneeze.

The really terrible thing about it there is very little that can be done for those suffering from the virus aside from keeping them hydrated as they ride it out. Some people simply feel nauseous, others get diarrhea as well as vomiting. The body does its best to flush the virus from the body and anything stopping the process can only aggravate or prolong the symptoms. The only good thing about this particular illness is that it passes with relative quickness – lasting no longer than a few days – and is rarely life-threatening except in those who are elderly, frail or very young.

The real danger is dehydration. As uncomfortable as you may be feeling should you contract this virus, worse still will be the reception at the local hospital when you arrive – as you present the possibility of an enforced quarantine.

Also, for non-nationals you will most likely be charged should you be admitted. My sister ended up with a bill of €90 for spending several hours in a chair receiving an IV of saline for the purposes of rehydration. Stock up on the vitamin C if you’re visiting Ireland this winter!