What’s up with the whole Northern Ireland thing? 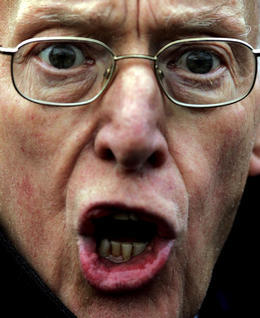 So some time last year England finally told the Northern Irish government that if they couldn’t fix things Dublin and London would get together and do it for them. To that end, they told the folks in Northern Ireland to meet the accords of the Good Friday Agreement or their positions and salaries would be dissolved.

Well, now Ian Paisley (Northern Irish church and state leader vehemently opposed to catholicism and homosexuals . . . and kind of SCARY lookin too, ain’t he?) is saying the November deadline won’t be met.

You know, before moving here I used to wonder what was up with the North of Ireland. I got a lot of vague anti-British “If you knew what I knew you’d understand” speeches from my father (wonderful circular logic, that), but never anything I could make any sense of, sure wasn’t our family part English? I never really understood what the problem was. Most folks from the states with Irish roots and have a similar sense of the thing:

Well, since moving here I have learned something . . .

Here in the middle of Athlone there is an IRA statue. Laurels and wreaths get placed on it regularly. I’ve heard first-hand stories of family members shot in front of their families for refusing entrance to the black and tan troops (so named for their mis-matched/patchwork uniforms – Britian’s “real” soldiers were busy with other things, so criminals and other miscreants of Britian “not good enough” for the army were sent to serve time for offenses as troops in Ireland to “enforce” British rule – and boy did they do some awful things). Athlone is, so I’ve heard, the oldest operating garrison town in Europe.

A friend told me recently that the Irish have fought on every side in every war in the last two centuries. Perhaps that’s true. Maybe the only lads who could legitimately be given a statue are those locals who fought for the freedom of their own country – hence the statue. In this post-911 world, such things as revolutionary fighters are often painted with a different brush. Sure, look at the New England soldiers resisting the British army in the 1700’s by hiding in trees and shooting at marching troops in formation – if that’s not terrorism, I dunno what is.

Someone once told me one of the greatest farces of modern politics is the past two centuries of conservatives in the states sending money to socialist radicals in Ireland.

Yeah, the whole thing is a big mess. Nevertheless, can’t we all just get along?

I was thinking, what if Britian did do what they’re threatening to do and revoke the relative autonomy up north and sit down with the Irish republic to discuss what should be done with Northern Ireland? I could see a practical solution: get a bunch of stout Irish lads with shovels marching up to the north and digging a trench. Great big fellas with shovels digging away to cut off northern Ireland from the main continent and then giving her a big shove, to float off into the arctic sea.

I mean realistically, at this point you’ve got an area that belongs to Britian that Britian doesn’t want. An area that Ireland wants, but that doesn’t want to be a part of it. Seems to me they should be their own bloody country and deal with their own problems themselves; that’s the only solution that would solve everyone’s problems.

Maybe if they realised they were all on their own together they’d learn to get along.

But it’s late and what do I know?