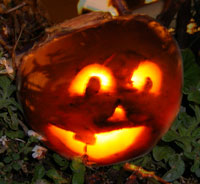 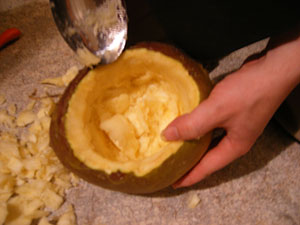 What you see there to your left is the final result of my experiment in reviving an ancient Irish tradition: the carving of a turnip into a jack-o-lantern.

Yes, the original jack-o-lantern was a turnip and not a pumpkin. I have to admit that I had my doubts when I purchased the turnip a few days ago. Accustomed as I am to carving our lovely soft, naturally hollow pumpkin gourds, the dense firm turnip flesh seemed a difficult proposition: less giving a face to a lantern and more like carving a statue from a chunk of marble.

Nevertheless, I proceded undaunted. Using a pumpkin knife and a steak knife at different stages, I first carved off a serviceable lid and then made mince of the inside of the turnip, going for a cyllindrical cavity shape. Turnips are a lot less sticky than pumkins; the flesh is similar to a potato, but far heavier. 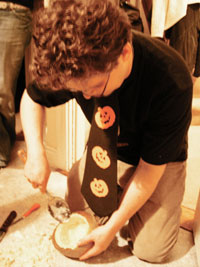 It took me about 10-15 minutes to get my cyllindrical cavity carved out of the heart of the turnip, making sure that the front wall was at least 3cm (half an inch) thick. Then, I drew a face on the front with a sharpie and cut the features out.

Then we went outside and placed a lit candle inside. It looked pretty good, although turnips aren’t nearly as luminescent as pumpkins; the candlelight is visible only through the little face I carved and not through the walls of the turnip (unlike pumpkins).

My little turnip took twice as long to carve and was dwarfed both in size and radiance by all of the pumpkins glowing orange around it.

I don’t see Ireland going back to turnip carving now that pumpkins are readily available to those desiring to get their halloween carving hats on.