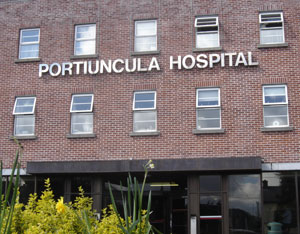 It comes around every winter in Ireland – the winter vomiting bug.

Highly contagious, if a hospital admits patients with the bug they will be quarantined from the other wards. Last year wifey had the misfortune to catch the winter vomiting bug when she was more than 11 months pregnant. The downside was there was very little that could be done for her and if you think throwing up constantly is bad, try is with a squirming, kicking baby in your abdomen. The good side was she got her own spacious ward and was able to make her repeated trips to the throne room in complete privacy.

So last night I gained a new level of sympathy for her trials when the little sister and I found ourselves strongly in the grip of the virus at Portiuncula Hospital in Ballinasloe. We were plugged into IVs and left in our own ward from around 4 until 9am this morning. Now we’re home and feeling like linen cutouts of ourselves.

So, if you’re visiting Ireland in the winter, here are some things you should know about the winter vomiting bug:

It turns out this year is no different, here is a news story on the virus outbreak.