The Outsiders – Exposing the Secretive World of Ireland’s Travellers 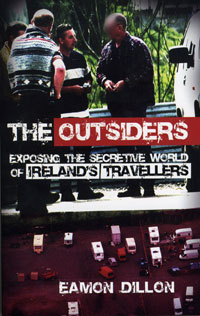 This book concerning Irish travellers was recently published and, as I had recently blogged here about “the Hulk” I decided to alleviate some of my ignorance on the matter by reading this book.

This book spends almost the entire time discussing the criminality of the travelling community, focusing specifically on a few notorious personalities. At the end of each chapter the author presents us with a Jerry Springer-like platitude wherein he tries to demonstrate his even-handedness on the subject matter. While it’s a bit of an eye-opener for anyone who hasn’t opened an Irish newspaper in the last ten years, I had a very difficult time reading this book due to the quality of its writing.

Seemingly slapped together from various independently written newspaper articles, reading this book for fun is like trying to appreciate the poetry in the narrative voice of the books of Leviticus. Sometimes just a tedious list of facts and names, The Outsiders often repeats itself, recyling phrases over and over again as if the author had never meant his various chapters to be read in sequence.

Occasionally, a part of the book will refer parenthetically to another part of the book – this seems the only attempt to give the narrative of The Outsiders any cohesion. Spelling and grammatical mistakes crop up constantly, which flabbergasted me. This is a published novel – where the hell is the editor???!

In any case, this book gives a bit of history on some of the more notable exploits of the most notorious travelling families in Ireland. Illegal caravan parks, bare-knuckled boxing to hit-and-run robbery and international scandal, The Outsiders reads like the courts section of a local newspaper – criminal subject matter, badly written. After reading this book I still have no idea where travellers originally came from, what sort of art and music their culture has produced, what their language is like (it is mentioned that their language, “cant,” exists, though there are no examples of it given) or anything about members of their community who did not commit horrific crime.

Seriously, are there no notable traveller personalities, stories, humour, art or achievements other than the criminal acts of the last 20 years? If we are to believe this book – no. This book should be named The Criminals – Exposing the well-known world of Ireland’s Traveller Criminals. I actually thought I might learn something about travellers from this book, instead I feel like someone has drunkenly shared with me their most notorious exploits.

At the end of the day, there is no doubt that there is a lot of research behind this book or that its subject matter will ensure decent sales, I just wish someone had made the effort to proofread the damn thing.