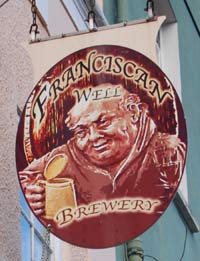 The Franciscan Well is a rarity in Ireland: a real Irish Microbrewery.

There has been a pub on this site for as long as people can remember. It’s also protected, as it’s an historical site with an ancient well on the premises of what used to be a Franciscan abbey (hence the name). Truth be told, the well is not used in the brewing of the beer, Russel, the brewer, explained to me. They had the water analysed and it turned out to be a combination of runoff, well water and a few other sources – too inconsistent for the purposes of brewing. The main Cork city watersupply is just about perfect for a brewer’s purposes, so that’s what The Franciscan Well uses.

The bar itself has done its best to capitalise on its just-off-the-centre-of-the-city location and has a sizeable covered beer garden out the back where frequent BBQs are held during the warmer months of the year. The pub itself is a spacious affair with plain wood and copper elements giving it a very modern, American microbrewery feel. 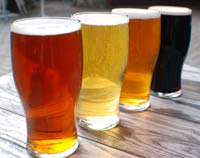 The blonde beer is the lager and has a lovely malt flavour. The red is based after a traditional Irish red beer and is probably the beer The Franciscan Well is best known for. The colour (red) is the colour of Cork city and the name, “Rebel Red” is an inspiring one for those who feel a swell of emotion whenever Irish nationalism comes up in conversation. I, personally, have seen Rebel Red on tap in Dublin and Galway. Shandon Stout is named for the bell here in Cork that was, until the installation of the bell in London’s Big Ben tower, the largest bell in europe. The stout is a lovely example of this famous Irish style stout beer: milky smooth and creamy to drink with that characteristic head. Hold it up to the light to find it’s completely opaque. Really. Hold a Guinness up to the light for contrast: you’ll be able to see through it. This is the way a black beer should be: black. It’s really a lovely, lovely stout, head and shoulders above the usual you’d find on tap throughout Ireland.

Russel has just finished brewing this, an American-style Pale Ale. Oh my stars and garters, the first sip of that heavenly hopped beer sent me reeling. My poor, deprived taste buds have been missing a beer with a bit of flavour to it. Purgatory Pale Ale it’s called and my, but what a lovely beer. Russel explained that this style of beer has been a long time coming; Irish consumers just weren’t ready for it at first. His attempts to brew something similar 10 years ago were met with shock and mildy insulted patrons would return with their glasses saying that the beer tasted “like it’s gone off.” Nowadays people flock to The Well for Russel’s beers. Fair play to him.

If you’re in Cork city, DEFINATELY stop by The Well and tell ’em we sentcha. If you like beer, you won’t regret it.