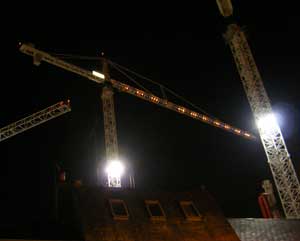 Hilariously enough, Kevin mentioned their festive decorations today in his response to another post. The height of festivity, one might say, Kevin.

One could be justifiably beaten for saying such a thing, too.

It’s true the second largest shopping centre in Ireland is being built here in Athlone and the tallest crane is among the eight cranes on the job. While strolling along the other night I chanced to look up, admiring the festive addition to Athlone’s stratosphere.

Then it occurred to me that some poor bastard had to go out along that arm in our recently stormy weather to string those lights along the length of the giant arm.