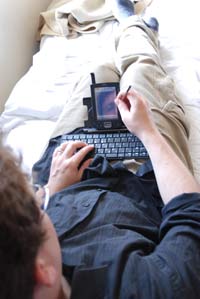 Jiminy Christmas I feel so high tech.
I have been using a palm pilot since my friend Jason introduced me to them in the 90s. When I was travelling I purchased one of those collapseable keyboards so that, if I wanted, I could use my little organiser as a tiny laptop, getting some writing done wherever and whenever I wanted. Hey, for less than half the cost and half the size of a laptop, I was getting everything I needed done.

Never has it felt cooler: I am currently sitting in our hotel room in Cork typing this on my palm, which has automatically logged into their wireless network so I can post this to my blog. 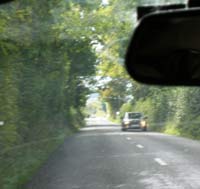 So we all piled into the aul car yesterday and headed for Cork. The roads were clear, the sun was out and the munchkin was in great form. We stopped in around lunchtime at the Rock of Cashel (more on that later) and got to see first hand that the new M8 motorway into Cork is, indeed, open. Much like the other Irish motorways (or “dual-carriageways”, as they’re called in Ireland), the M8 is a toll road (€1.60) and takes a good chunk of time off of one’s journey.

I have to admit I feel a bit of nostalgia for the old way of travelling through Ireland. It may have taken four or five times as long, but there was charm in the small towns and villages one used to pass through every few miles. As the new motorways surge like snakes out from Dublin city, tourists and travellers are increasingly removed from exposure to what used to be a tenant of the Irish way of life: it doesn’t matter where you’re going, it’s what you do on the way. I have to wonder what’s going to happen to all the little villages and mom-and-pop shops that have grown up along the roadways over past centuries.

When we were in Cashel we got to talking with a couple of US travellers. They were doing what is, unfortunately, a typical US thing: attempting to see as much of Ireland as possible in the space of a week’s time. While I philosophically disagree with this method of travelling, I can see two very good reasons for attempting it.

1. US travellers have less time off. Certainly they have significantly less time for travel than europeans; usually they take a week, possibly two weeks, at a time. Planning a big trip somewhere that takes at least a day’s travel to arrive at (thus losing at least couple of days of that precious holiday time to transit). The pressure is on to SEE the place. This can result in a misguided attempt to fill one’s itinerary with as much as possible. The underlying philosophy here is: the more you get to see = the better the trip.

2. Matters of scale. It needn’t be said the the states is a big place. Looking at Ireland on the map, people from the US might be forgiven for thinking it looks eesy-weensy. “Surely,” they say to themselves, “we could travel the length and breadth of that little island in a few days.”

It was this second idea that had so distressed the couple we met yesterday. They were attempting to see everything from Belfast to Cork in 5 days. They had measured the distances on the map, compared them with the time it takes them to travel similar distances in the states, and completely misjudged the amount of time it would take them to “see Ireland.”

While the new snaking motorways might eventually (when they connect) facilitate this sort of travel between major metropolitan areas, it is certainly not possible in today’s Ireland. Unlike the states, Irish people have been living a settled existence here for thousands of years. There are walls underneath the bogs, people (and bogs are old). No bit of ground upon which you will tread has not been trod uncountable times before. You can’t just lay down street grids when you “plan” your cities here. These cities grew organically over thousands of years from collections of huts- and those hut-dwellers were not thinking about dual-lane motorways or the magical ability to move all the way across their country quickly. Modernisation of travel in Ireland has had to occur like everything else here: over and around what is already here.

The other real tragedy about these great snakes of motorways is this: Ireland has always been a rural, localised society. Not only do the new motorways bypass this “real” Ireland, but they make it an anachronism. The experience of village life and local isolation that has so defined Irish society throughout history is crumbling away as the snaking motorways stretch out to bite their own tails.