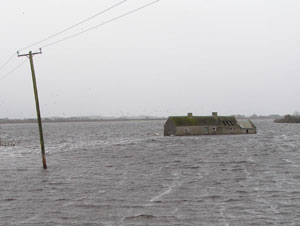 I have been discussing the flooding of the Shannon in previous posts. First I took a photo showing the disappearance of the weir under the rising river, then The Shannon actually burst its banks and proceeded to flood the town.

Returning to Athlone this week I noticed the waters had abated hardly at all. The flood plains themselves cover 6,000 hectares in five Irish counties: Roscommon, Westmeath, off, Galway and Tipperary. This is really bad news for wildlife in these flood plains.

Just one victim of the floods is the corncrake, an endangered species of bird, has all but disappeared from the area. 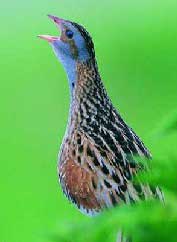 Birdwatch Ireland has reported that there were NO nesting corncrakes in summer 2006.

The Middle Shannon Callows qualifies as a site of International Importance for wintering waterfowl. Since the beginning of this century, it is estimated that there has been up to an 80% reduction in the wild bird population mainly due to summer flooding.

For more information on environmentally-oriented travel, make sure to check out the Eco Travel Logue.