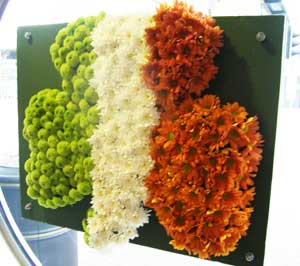 Well, not entirely. I had asked the bootsnall forum if there was anywhere folks would like me to go and report back on for Paddy’s day, but I’m sorry to say I didn’t get a single suggestion! So, it was an Athlone Saint Patrick’s Day and that suited me just fine.

It was an early start this morning for wifey, lil sis, the munchkin and I. We headed off to Dublin to drop lil sis off. I’m happy to say the roads were fairly clear. Dublin airport was bustling with folks in giant foam leprechaun hats, green shirts and shamrock sprigs on their lapels.

Wifey snapped a photo of the flower arrangement there on the left, they were mounted in the windows of the arrivals hall at Dublin Airport. Some flower arranger has a lot of patriotism and time on their hands!

In any case, the drive back into town was uneventful, but it did begin to sprinkle a bit. So much for sunny Paddy’s day! A bystander at the Athlone St Patrick’s Day parade said to me, 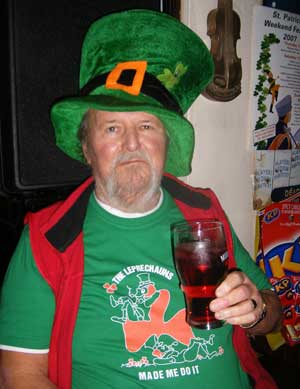 “Sure, it wouldn’t be Paddy’s Day without a bit of rain.”

I managed to shoot the parade in its entirety – it’s be processed at the moment and will appear here as soon as I can get it online. If you missed the parade, you’ll be able to watch it here as if you’d never missed a thing!

I also did a bit of wandering around chatting to folks, so I’ll stick that video up here as well.