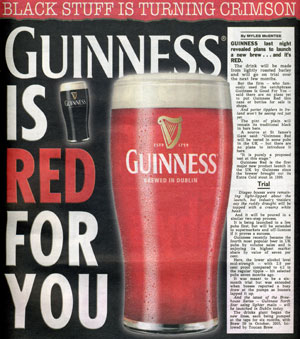 Okay, this is really absurd.

My preference for microbrew and unusual beer notwithstanding, red-coloured Guinness?

I saw this article in the paper today. Guinness has been running their “brewers” series of different Guinness beers all this year, a move I feel reflects the more cosmopolitan leanings of the modern Irish drinker, but this beer isn’t even set for Irish release at all – only in England. As Diageo (the company that owns Guinness) already owns Smithwicks, the most popular “red” Irish beer, I can only assume that this beer is not a red ale but a red-coloured beer; elsewise it would compete with Smithwicks for tap space.

The article describes the drink as having a white, creamy head – something most red ales would be lacking. I suppose a nitrogen-delivered red ale could have a similar cascade to the aul pint of Guinness, but I wonder is this something more insipid; more along the lines of food colouring and less along the lines of a fancy beer delivery system . . .

We’ve seen the green beer on paddy’s day (never here in Ireland, thank God), but red-coloured beer just for the craíc? You’ve got to be kidding me. I’ll be in Manchester next week, so I’ll be sure to check it auuuughhht. Stay tuned . . .