President of Ireland in Athlone

There it is, the 55th most powerful person in the world’s limousine cruising past a low income housing area in Athlone. That’s right, Irish president, Mary McAleese, visited Athlone Wednesday last to talk about education and peace in the North. In her speech earlier in AIT, she spoke about the Shannon river, saying, 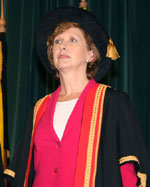 “It has been silent witness to our shambling poor, our forced emigrants, our conflicts, our colonised and emasculated generations. And now this transformed Ireland, this changing Athlone, the best educated generation ever in Ireland, the most emancipated, the most egalitarian, the most likely to complete the firm and uncompromising ambition of our people”.

She also talked about the north, saying,

“Somewhere I hope, not too far down the line there is a generation coming which will have grown up in a peaceful and prosperous Ireland, whose citizens North and South work comfortably and well together””

Thing is, I’m not too clear on what the President of Ireland does. I mean, the taoiseach is the prime minister and handles decisions and policies. When Mary McAleese ran for president the campaign was quiet and there was almost no competition – she sailed into the next 7 year term. She seems to spend her time doing ambassadorial public relations duties that have nothing to do with how Ireland is run. The red hair, the green dress – she’s a walking flag!

Honestly, what does she do?

And this is the 55th most powerful person in the world? Who’s 54, Rod Stewart?