Podge and Rodge’s Scare at Bedtime 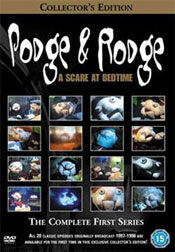 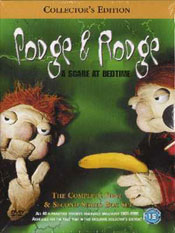 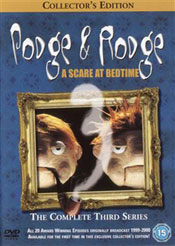 It doesn’t get much more Irish Halloween-y than this, folks.

Podge and Rodge are now huge Irish celebrities running their own talk show on RTE. They do things on this show to very famous people that you would not believe. So, hold up, you say, who are Podge and Rodge? Well they’re puppets who started out as peripheral evil characters on The Den, a children’s show. Their language and rude subject matter quickly got them removed from The Den and installed on a late night program called A Scare at Bedtime. The show’s title is a parody of the old A Prayer at Bedtime program which used to air at the end of RTE’s broadcast day and consisted of a catholic prayer being read over a series of calming images.

Obviously, Podge and Rodge’s program, airing in the same timeslot at the end of the broadcast day, was very different. The program features Rodge (the denser of the two) arriving home and, amongst various lewd jokes and offensive anecdotes, Podge would procede to relate a horror story to his brother.

I finally broke down earlier this year and bought the combined first and second series as well as the third series on DVD from Zhivago Music in Galway and am so glad I did; these DVDs are hilarious. If you’re anything like me and you’re into the bizarre and halloween-oriented, this is perfect slice of Irish horror/comedy.

The DVDs aren’t easy to find and exist only in region 2 PAL video format (that’s European standard). So, if you are elsewhere in the world and wish to purchase and watch these DVDs, you’ll need VLC or a region-free DVD player.

A good history of Podge and Rodge can be found here.