I was reading a newspaper article in the Westmeath Independent the other week that stated, “More than one in seven of Athlone population is now non-Irish.”

In the article it delineated the major groups of foreign nationals and stated that there were 91 “Americans” (although I’m sure the paper meant “United States citizens” and didn’t mean to include people from Canada, Mexico and all the countries of South America) and I realised that wifey and I wouldn’t be counted among them as, although we are indubitably from the states, we are registered Irish citizens.

What would have been more interesting, I think, would be to have reported on Athlonians’ places of birth. I know of a German Athlonian, for example, who was born in Saudi Arabia.

This got me to thinking about “Irishness” and being Irish.

I have a good friend who had never been to Ireland in his life. For that matter, neither had his parents. By his 20s he had Erin Go Bragh tattooed across his shoulderblades and the tricolour on his upper arm. He had also gotten into fistfights defending a country he’d never been to and a culture he knew very little about. When asked about his ethnicity he would say, “I’m Irish.” 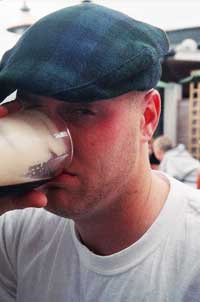 I was introduced a couple of years back to a “local Athlone girl” with a strong Chicago accent. When I asked her how long she’d been in the states, she told me that she had been brought as an infant by her parents and grew up there. She went on to explain that she was just back with them visiting, that she had never lived in Ireland in her life. When I asked what she considered herself she said, “I’m Irish.”

Personally, my father was born and raised here in Ireland (and I grew up in the San Francisco bay area thinking that his strange predilection for tea (everyone else’s dad drank coffee) and butter on his sandwiches was a personal quirk). But even with Irish parents and years living here, my birth stateside means that, around Athlone, I will always hesitate when someone asks, “Are you Irish?”

For that matter, the Athlonian German born in Saudia Arabia has a son who probably won’t either.

The thing is, what makes someone Irish? It would seem a desirable, almost viral, identity to have. It often eclipses other ethnicities in a body. I suppose that so many people left Ireland for so long that there really were more Irish people abroad than in Ireland herself. Their pride and sorrow at leaving their homeland has had an impact on their descendants’ sense of identity. My tattooed friend may not be able to sing the Irish national anthem (for that matter, I’d say few Irish people can), but he’s willing to get into fights when he hears Ireland and her people being slandered.

It’s not just the expatriated Irish who hold onto their identity so tightly. Ireland has endured waves upon waves of invaders over the century and yet the people living here still call themselves Irish.

When the celts invaded Ireland the centre of their power was somewhere in Switzerland at the time. Today the terms “celtic” and “Irish” are almost interchangeable.

The vikings came . . . and stayed. Where are the those horned helmets and ponytails now? Well, the last Miss Ireland was a blonde, wasn’t she? 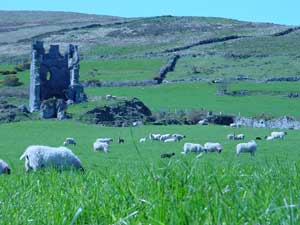 Then the Normans came . . . and they stayed too. You know those castles you see all over Ireland? If you were to lift them from their foundations and examine the manufacturer’s information on the bottom it would read: Made by a Norman.

Then there were 700 years of occupation, including genocidal military campaigns, famines and nearing total expatriation. The 26 counties of the Irish Republic only gained their independence in 1921. Today, who has the strongest, fastest growing economy in Europe?

You guessed it: those tenacious Irish.

Ireland as a nation may be less than 100 years old, but consider that there were people here in 7000 B.C. keeping livestock when the rest of humanity was still hunting and gathering.

In short, the Irish abide. The Irish identity is hard as a diamond and fluid as water – it goes everywhere, endures everything and becomes everyone. There are people all over the world who may never have even been to Ireland who will identify as Irish. The problem comes when one wishes to be recognised by the Irish-born as one of their own.

As powerful as the Irish identity has been overseas, lasting through generations and mixed marriages, it doesn’t remain intact under such strain. It’s a testimony to the strength of the Irish identity that it survives so potently through all that, but it’s certainly not the same as never having left in the first place – and this is the crux of the matter.

Irish law used to be that, regardless of who you were and where you were from an Irish birth made you Irish. This is the idea that seems to have stuck with the Irish people and this is why I will forever be a yankee here in Athlone.

But even if wifey and I moved back to San Francisco and raised the munchkin there, she could return here to Ireland at any point during her life and be welcomed home.