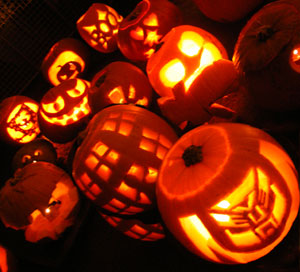 Well, the party was a huge success. This was our fourth annual pumpkin carving party and by far the largest pumpkin slaughter we’ve witnessed in Ireland thus far. I had the occasion to serve the two mini-kegs of Kinsale Irish microbrew I’d brought back from Co Cork and they were received with surprise and delight. The spread of food included a couple of americanisms including Lipton Onion Dip (a holdover from my childhood, I’m afraid: it just ain’t a party without onion dip).

I was honestly surprised by the carving zeal this year.

The first couple of years it was myself and wifey carving away with childish glee while skeptical Irish friends watched safely from the sidelines with mixed astonishment and nausea. This particular party, the pile of pumpkins was pounced on promptly by party-goers. There were folks waiting on the availability of carving knives, which was great to see.

A couple of the girls told me that they had been carving pumpkins for years themselves. The designs were inventive and successful (mostly) in their execution. Most impressive (to me) was the spongebob squarepants pumpkin and transformers pumpkin.

I’ll be posting about the turnip experience among other things that occurred last night. Stay tuned!