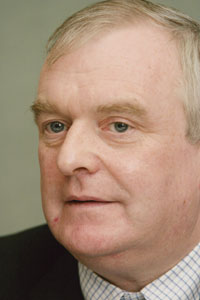 Irish soccer has long been the red-headed stepchild of Irish sport. It’s not that Irish people don’t follow the sport – far from it! Soccer is definately worshipped here, but Ireland’s soccer heroes play in the neighbouring English Premiere League where there is more money to be had for their skills.

In any case, gone unnoticed is the domestic Irish Soccer League which has just undergone a significant change. What used to be two leagues – the eircom League and the Football Association of Ireland – have just blended. The FAI has absorbed the eircom teams and named a premiere division of teams, creating a united soccer league in Ireland for the first time. The twelve teams in the Irish premiereship are:

In a local twist on the story, Athlone entrepreneur Paddy McCaul (of Shamrock Lodge Hotel and Donna and Joe fame) has become the first ever Chairman of the new body. Come on the town!

So, could it be that the new consolidated soccer league will be able to kindle a bit of interest in the domestic teams playing the sport? I suppose only time will tell. The fact is, with the UK’s population dwarfing that of Ireland and the budgets of the English premiereship teams doing the same, star Irish players will continue to play for English clubs if the chance arises.

While mightier than ever before, the FAI is still just a lower-eschalon feeding ground for premiereship hopefuls.

In any case, whether Irish players are at home or abroad, the Irish team is still not on the world cup roster.