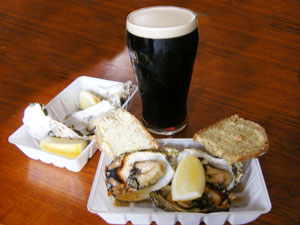 I really don’t know where the tradition got started, but for some reason there is an association between Irish stout and oysters.

Stateside I have seen a few of these stout and oyster festivals, usually sponsored by the Diageo boys and their Guinness brand. But hey, why not another Irish stout, one more southerly in inclination, like Murphy’s?

It would seem that the oldest pub in Ireland has an association with Murphy’s because once a year there is a mini Oyster and Murphy’s party in Sean’s Bar.

The deal is this – for every order of oysters you get a coupon for a pint of Murphy’s. Now I love me an oyster and it needn’t be said that I have a great deal of personal affection for Irish stout so – happy days! 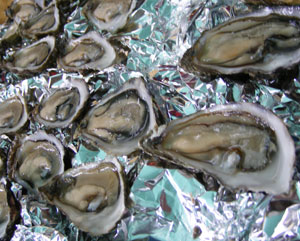 I think the oyster folks are well aware that a raw oyster isn’t everyone’s cup of tea, so you can get yours bbq’ed with spicy butter if the thought of uncooked shelfish gives you the heebie-jeebies.

In all, it’s a pretty good deal. An order of oysters with free pint coupon is €4.50.

The oysters were Galway bay oysters and were very very tasty. A squirt of lemon and a drop of tabasco and you’re in heaven, I’ll tell ya.