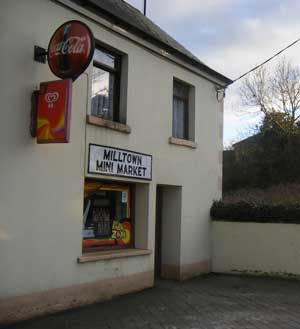 I had the misfortune of mechanical issues with my vehicular transport this past week. Specifically, one of my wheels virtually came unmounted from the rear axle of my car. Not the tire now, the actual wheel mounts.

Needless to say, I wouldn’t be arriving home in said vehicle that evening. I turned off the motorway and drove the ailing machinery in question at 10mph until I arrived in Milltownpass, where she came to a rattled, unsteady rest in front of the Milltown Mini Market.

Normally, I would have felt a bit odd parking my car on the path directly in front of a shop door, but this shop had closed less than 2 weeks earlier, as a handwritten sign on the door attested. I looked around the town and was struck by the silence.

A single bird called clearly from a couple of fields away and I realised the Milltown Mini Market wasn’t the only place that had recently closed. 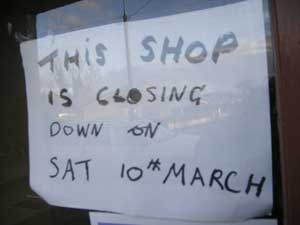 I mentioned the changing face of Ireland’s motorways last October, and recently talked about how rural Ireland is dying a death as recently as January. Standing outside the Milltown Mini Market, however, I was faced with the actual, firsthand evidence of what could almost be considered an Irish ghost town.

I rang a tow service, they told me it would be at least an hour, so I went down to the local pub for a cup of tea. Sitting alongside the pub’s only other patron, I asked the publican how the opening of the motorway had affected Milltownpass.

“Completely,” came her answer. “The petrol station was first and the mini-mart closed there as well.”

“There’s no passing custom at all anymore,” came her answer as she turned back toward the dish washer. I noted there was a handwritten sign advertising live music two Saturdays ago on the wall.

My tow truck ended up taking closer to two hours to arrive, during which not a single additional patron entered the pub.