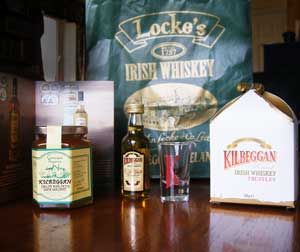 You all remember my raving about Locke’s Distillery in Kilbeggan, right? Well, it would appear that this past Monday was their 250th anniversary.

There are currently three whiskey distilleries in Ireland. Two are owned by the same company – Middleton’s – one in Cork and one in Belfast. The third is Cooley’s distillery.

I’ve said it once and I’ll say it again – other than the two companies mentioned above there is no such thing as independent whiskey distilling in Ireland (of the legal sort, anyway). That’s right, any Irish whiskey you may have had was made was probably made in the same tank.

No more – Cooley’s have officially reopened Locke’s pot still distillery in Kilbeggan – the oldest distillery in the world – for distilling again.

That’s right – a fourth distillery in Ireland. Sing halleluia! Now, whiskey has not been made in Locke’s since they shut down back in 1953. This is a momentous event, folks. There has not been a new distillery opened on Irish soil for God knows how long. Unfortunately, their opening day was a deadline day for the newspaper and I simply couldn’t make it out. The editor was of a like mind but hey, if I wasn’t able to make it, he certainly wasn’t.

It was siameasy to the rescue – he snagged me a goodie bag (contents pictured above) and dropped them by the house a few days afterwards. Deadly.

Cooley’s is really doing well for themselves. Their Connemara 12 year and Tyrconnel single malt whiskeys deservedly each won a Gold Medal at the 2007 San Francisco world spirits competition this month. They have also launched a new 15-year premium version of their Kilbeggan whiskey to commemorate the reopening of Locke’s.

Fair play to them. Yet another reason to visit Kilbeggan if you visit Ireland – not only is it the oldest distillery and probably the best whiskey museum in the world, it’s your only chance to actually witness the process of making Irish whiskey firsthand.