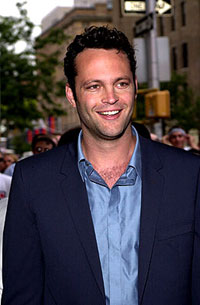 So yesterday I posted an Ali G video he recorded in Northern Ireland.

Today I came across this article about Vince Vaughn in Northern Ireland interviewing politicians. Vaugh, apparently, became interested in the murals in Belfast during a previous visit when he became intrigued by the ones he saw dring a taxi ride from the airport. His recent visit was made during a filming break in London and is the initial step in making a documentary on Belfast’s murals.

Somehow I sincerely doubt if Vaughn’s documentary is going to be half as funny as Ali G’s.

I suppose that approaching the situation up north through the medium of Belfast’s murals could be interesting. Certainly its tangential angle makes it a much safer approach for the US actor than attempting to explore the political spaghetti of the area head-on.

The question is, Vince, it is art?