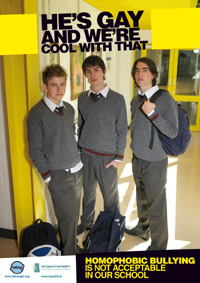 I came across some of these flyers around the town the other day.

Let me first say that, in my experience, the Republic of Ireland is an astonishly accepting place for all peoples, regardless of ethnicity, sexual orientation or creed. I recall with great fondness a visit to Ireland in 1996 with an ethnically Indian friend of mine. He certainly stood out of the crowd back then, but the locals’ interest was open and forthright and stemmed from obviously good-natured curiosity. This is the same attitude that I’ve seen (generally) toward alternate sexualities in Ireland. I’ve noted openly gay relationships around Athlone – even public displays of affection. There’s an openly transgendered fella I’ve seen around and nobody seems to even raise an eyebrow.

While I wasn’t educated here, it’s my understanding that, up until recently (perhaps still today?) Irish schools did not offer formal Sexual Education classes. They certainly didn’t do things like make condoms regularly accessable to students or have facilities for underage mothers who might wish to continue their education throughout their pregnancy. One might even go so far to say that anything even remotely associated with the topic of sex was avoided like the plague by the Irish educational system.

Now there are flyers frankly discussing students’ sexuality circulating in the schools? Don’t get me wrong, I grew up in San Francisco. I am more than comfortable with the whole GLTB thing. I’m just astonished that Ireland has jumped from NO mention of sex in school to publishing flyers that indicate a worrying presece of predjudice against gay kids.

I shudder to think this is the ONLY mention of sexuality in Irish schools.

What’s the story? If this is a government-sponsored group with a budget to spend, are they trying to prevent a problem from happening or is it indicative of an existing problem in Irish schools? If it’s the former – well, we all know what happens when you try to tell teenagers what to think. If it’s the latter, perhaps the government’s money would be better spent on a comprehensive sexual education program that covers GLTB issues. Surely gay-bashing has its roots in discomfort with one’s own sexuality – you can’t just address the symptom without addressing the larger issue.

I really don’t know what it is about these flyers that bugs me – maybe they strike me as contrite? I applaud the sentiment behind the flyers, I just question how effective they might be and am frightened by what could have prompted their creation.