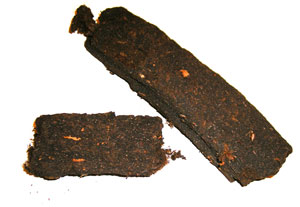 The first is turf.

This is the original Irish fuel. Those two pieces above there are an example. Cut painstakingly for centuries from the Irish bog using specially designed, long, flat shovels, turf is harvested primarily by hand even today. Once cut, the turf is set out to dry in piles resembling native american teepees. Rights to cut plots of turf from the bog in Ireland have been handed down through families for generations. Even today adult children return home at the end of summer to assist parents in turning the turf in its drying process.

Turf looks, for all the world, like a dried piece of mud with bits of vegetable matter sprinkled through it. In reality it is entirely vegetable matter that has been buried and compressed in the strange and harsh bog environment for thousands of years. Left to itself for another several thousand years, this stuff would be well on its way to becoming a more potent fossil fuel.

You can always tell when winter has hit Ireland by the lovely smell of turf burning. Unfortunately, it does smoke quite a bit, but it produces an aromatic smoke with a lovely character. It takes a while to catch, relying more on heat than open flame. Turf takes a while to light, but once caught it burns completely to ash and provides a long-lasting, warm fire. No wonder the ancient celts made it a habit to use this as their primary fuel.

My brother-in-law is a forest fire fighter in California and when he visited us here in Ireland was absolutely captivated by the mystical flammability of turf. He spent at least a half hour breaking off little bits and applying it to a flame – he simply couldn’t believe that this dense, heavy lump of dirt would burn.

Turf is quickly disappearing as the Irish need for fuel increases. Scientists tell us that turf will no longer be burned in as little as 5 years from now. Already it is illegal to burn turf in certain metropolitan Irish areas (like Dublin). Here in the midlands you can find places to harvest your own turf for a fee or purchase harvested turf from numerous private entrepreneurs who have more turf than they can use personally. Chances are, if you visit an older country pub in Ireland they will be burning turf in the fireplace.