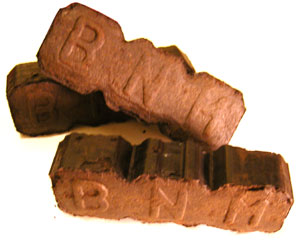 The first was traditional, hand-cut turf.
The second is briquettes.

Briquettes are harvested from licensed bogs in Ireland by Bord na Mona, the Irish fuel authority. Briquettes are, ostensibly, the same thing as turf, but the way in which it leaves the bog and arrives to the consumer is considerably different.

Turf is still cut and dried by hand, but the turf you get in briquette form is harvested by a machine that resembles a cross between a tractor and a hoover vacuum cleaner. The machine has a long hose which is sunk into the bog and sucks bog material into a chamber. The most onerous part of harvest turf in the conventional way, as far as delivery is concerned, is the delay of weeks between the harvest and the useability of the product. When the turf is drawn up mechanically in this fashion the water can be compressed or even heated gently to dry the turf almost immediately. This is why briquettes have their particular shape, after being homogenised, the compression they go through both removes the water and pressed Bord na Mona initials (look above there and see) into the briquettes.

Lighting briquettes is much easier than blocks of turf, but the briquettes burn much faster and do not give off as much of the lovely characteristic smell that hand-cut turf does, probably because the homogenization and heating processes get rid of much of the natural character.

Turf briquettes are widely available at all Irish petrol stations and most small shops throughout the country for between €2-4. Unlike wood and kindling, you will still probably need to purchase firelighters to get these burning but, unlike turf, you can easily go through a couple of bales in one evening.