Irish Bonfires a thing of the past?

So last night the Bean, the 15-year-old vietnamese boy, Anne-Marie and I piled into Betsy II and headed two hours north for a bonfire. As we loaded up with petrol before heading out, the Bean turned to the two yanks in the car and advised,

“Now, if we get stopped at a gardai checkpoint, we are headed to a friend’s halloween party – NOT a bonfire and there will be NO fireworks at the place we’re headed, because both of those things are ILLEGAL, okay?” He was greeted by an onslaught of self-mocking (except in the case of Anne-Marie) yankee nonsense.

“Oh mie gahhd officer! Is that, like, yer costume?!”

“Could you guys, like, totally take a picture of me with him?”

“Oh no waay! I totally want a picture too!”

“Okay, I think we’re going to be fine,” said the Bean.

Two hours later we arrived at a destination that will Monaghan remain nameless Monaghan. It was big T’s residence and, my, what a residence it was. Big T’s place is a converted farmhouse and the things they’ve done with it would spin your head. For example: they solved their watershed problem behind the stables by building a waterfall system with marble-lined pools lit by strategically placed LEDs. His house has another entire house down by the front gate for . . . um . . . the gatekeeper? Dunno. 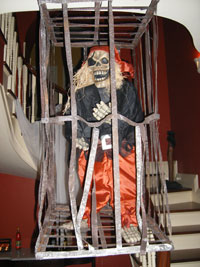 But I’m off topic. We were there for the non-existent fireworks and bonfire. As far as we could tell, the bonfire was, actually, nonexistent. I think we must have missed it. The nonexistent fireworks were, um, less non-existent than said bonfire, however. A large box of fireworks purchased across the border in Northern Ireland must have accidently arrived at our party, set up and lit. The entire barrage was set off at once (staggering them would give the gardai the time to triangulate, we were told) and lasted about 5-10 minutes.

But here is my main point: no bonfire. In fact, there were no bonfires on the two-hour drive up. There have been no bonfires in Athlone at all. The last few years, there are always loads of fireworks going off and huge orange bonfires being lit along the banks of the Shannon. This year: nothing so far. The government’s strict new firework/bonfire laws (including €3,000 fines, imprisonment and confiscation of cars transporting illegal fireworks) seem to be working.

It’s probably all for the best.

I just can’t help but feel a bit nostalgic for the mild shock I had the first year here when I saw the tiny shadows of people carousing around the massive, ancient bonfire rites. There was something so creepy and . . . old . . . about it.

As I said, it’s probably for the best.