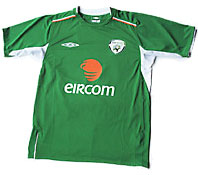 Ireland has had a rough time of it in the realm of international soccer.

After coming up from a seemingly impossible position in 2002, they lost their star player in a personality conflict with the coach (the famous Roy Keane/Mick McCarthy row has spawned several books and even a popular play). On a personal note, I remember exactly the text from my cousin in Dublin:

“Lashing rain today. Keane has left. All of Ireland in mourning.”

THEN, they lose out to Spain in SUDDEN DEATH.

As if to ad insult to injury, they didn’t even qualify for the 2006 world cup.

Last Saturday they lost 5-2 against Cyprus.

In keeping with the form, the lead up to yesterday’s friendly with the Czech republic in Dublin was plagued by injured players and general lack of hope. The coach suggested he might quit if the team’s performance remained as lackluster as it has.

Break out the tri-colour! Grab your foam shamrocks! Go bug the soccer world cup blog to stick the aul tri-colour back up amongst the other soccer nation flags!

Don’t we just love the football!

Report on the game.