Insight into the Irish personality 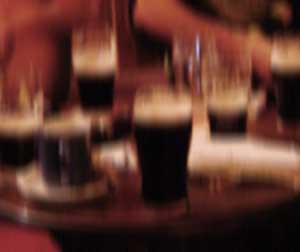 Whatever it was, the conversation among my coworkers last night turned to one of the great eccentricities of Irish culture and personality – the dichotomy of reticence and bumptiousness. In other words, how come, sometimes, Irish people are stubbornly polite and simply will not say what they think and, at other times, you couldn’t stop them for hell or high water from dancing on the tables like madmen?

The discussion began when someone at the table said that Irish people were known for never giving a straight answer. “You have to forgive me for saying so,” he began, “but sometimes we’re almost as reserved with our opinion as the Brits; we’ll go to great lengths to avoiding saying what we REALLY think.”

“Hang on,” interjected someone else, “I don’t know if that’s true. We say what we think, but the message is usually buried in mounds of guilt-laden suggestion.”

“True,” someone else said. “Like neighbours you don’t even know seeing you after you haven’t shaved for a couple of days and then rubbing their chin, saying, ‘Have you no respect for your family?'”

Laughter rippled around the table.

“Well,” I added, “where I’m from the Irish aren’t known for being reserved. I mean, you can usually count on the visiting Irish guy to be one of the craziest of any group.”

“Well sure, when we’re on holiday!”

“This is it,” Singer said. “We don’t give a shite about what we do – but we know everyone else around us does. That’s why we all follow all these unwritten rules at home – we’re worried about what everyone else is thinking. But when we’re away and we don’t know anyone . . . well, we go mad.”

She put her finger right on it. This is the thing I have been unable to explain or really understand. The confident, reckless Irish person you meet abroad could be the most hesitant and courteous of people at home. It’s the looseness around the core of the Irish psyche – they’re really not all that worried about themselves, it’s the opinion of others that cause them concern. “Locked up in the shackles of Catholic guilt,” as someone once described it to me.

This is the exact opposite of my upbringing in the states where, the more you know someone or a group of people, the more relaxed you are around them. When yanks go abroad, we tend to be overly courteous for fear of offending someone. I know, for my own part, I tend to be the most uptight when I’m around people and don’t know what they’re thinking.

It’s seems to be the opposite of the Irish inclination where they’re at their most reserved in known company and the craziest around those they don’t know.