How do you drive a computer? 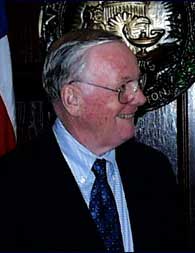 The man pictured there on the left once said that the greatest engineering achievement of this century might be “Getting rid of the credit card.” You may, however, know him better as the first man to walk on the moon.

If you think that’s a bit non-sequitur, try this on for size: Neil Armstrong was to be found in Dublin today appearing on behalf of the wealthiest companies on earth: Microsoft. Today was their official launch of their long-delayed Windows “Vista” operating system in Ireland at Croke Park.

May I take this opportunity to say that Microsoft has done more to damage Ireland’s use of technology than anyone else?

It’s ironic that Armstrong, of Irish descent himself and an icon of what mankind can achieve, is lending his presence to Microsoft; one of the greediest stiflers of independent achievement.

Microsoft’s unsavoury history is peppered with reprehensible business practices (I witnessed firsthand in the 1990s how they bullied and destroyed smaller competitors who created better products the big MS felt threatened by). Here in Europe they’ve been convicted of corporate crimes (in fact, Microsoft was the perpetrator in the largest anti-trust case in european history) and have saturated innocent people’s homes with confusing and mostly useless products that waste hours and hours of people’s lives.

So, here’s the thing about Microsoft in Ireland that bugs me the most: the ECDL.

When we first moved here I thought it was a joke. I laughed. Out loud. Then I realised the person who told me wasn’t laughing. I had to confirm what they’d told me with several other sources before I believed it. Gentle reader, if you apply for a job in Ireland you may be asked for your ECDL. So, what is an ECDL, you may ask?

This is not a joke. I am so serious.

I have seen the course taught. I even have a certificate to teach this course (though, God help me, I never will). It is required by many Irish employers. The ECDL is a course in the Microsoft Office Suite. I don’t know how they did it, but they convinced A GOVERNMENT AGENCY to accept this tutorial on their proprietary product as the universal, de facto proof that someone knows how to operate a computer. Therefore all companies, schools and public offices in Ireland honor and subscribe to the ECDL as a necessary course for any computer user.

Just so we’re clear, this is not a course about how to use a computer. This is a course on how, step by step, to do specific tasks within the Microsoft Office suite using the Windows operating system. It does not expain ANYTHING about how or why your computer works, the internet works, what an operating system even is or what on God’s green earth you’re going to use your new step-by-step instructions to accomplish.

I have seen little old Irish ladies take this course and walk away as though they’d been boxed in the head. All they want to do is stop being afraid of their computer so they can get photos of their grandchildren from their email. Instead, they leave their ECDL course €1,000 poorer and none the wiser on how to do what they want.

THE ECDL IS A COMPLETE FECKING WASTE OF TIME AND MONEY.

I have met instructors who TEACH this course who refer to DVDs as magnetic media. I have seen businessmen who have taken this course still unsure of what the difference between Access and Microsoft Word is (please don’t ask them what a spreadsheet is or what program to use for any kind of graphics, for feck’s sake). Furthermore, divert an ECDL student from his careful “click here and then you click here” education and he is completely lost on his computer.

It needs to be said: the ECDL does NOT teach people how to use computers.

Mr Armstrong, you know that, don’t you? Spaceships might need a pilot, but computers do not need driving.

Thank you, that will be all.