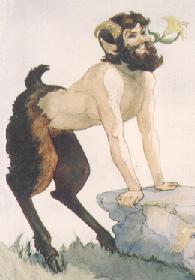 So there I was in Tesco and ringing one of the co-hosts of tomorrow night’s party to see could I get anything that had been missed when he put onto me the purchasing of five more pumpkins. This brings the total up to a mighty 20 pumpkins in our house and many of the guests have told me they’re bringing their own.

In any case, I was bringing my bits and bobs up to the checkout and got to chatting with the clerk.

“Ye Americans are great for putting the effort in,” she said, laughing at all my pumpkins,“I’ve never got a pumpkin myself.”

“Well,” says I, “The carving of vegetables doesn’t seem to be a midlands thing all right, but I’ve heard folks from Donegal and Kerry tell me they would have carved turnips for halloween.”

“I’ve heard that, all right.” she replied.

I went on to explain that the story of Jack-o-lantern isn’t an american tradition, but an Irish one. To which she asked,

“Have you ever heard of the púca?” I told her I had not.

“Well,” she aid, “púca is a spirit around this time of year who, if he finds you asks you ‘High sky or low sky?’ and if you say ‘High sky,’ then he gives you a kick to the heavens and if you say ‘Low sky,’ he kicks you into the ground.”

“What does he look like? Is he a spirit?” I asked.

“Well,” she began, turning for confirmation to an older white-haired woman next in line, “he would have a goat’s beard, wouldn’t he?” The woman nodded in agreement. “A goat’s beard and hooves, like a satyr.”

Now. There ya go! An Irish myth I’ve never heard. I googled púca (pronounced “POO-kuh”) and found this story.