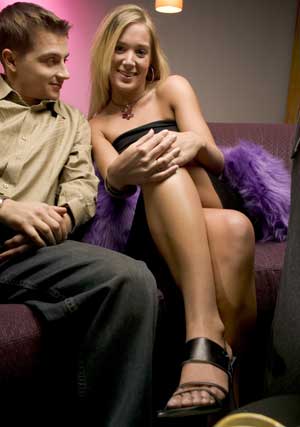 Things sure have changed in the aul emerald isle since the celtic tiger came along. The chaste masses of churchgoing Irish are now having unprotected sex out of wedlock at a rate that could give a migraine to a Thai health official.* Let’s step back in time – there once was a time in this fair country (most of the past century, actually) when there was no such thing as separation of church and state.

I’ll give our US readers a second to catch their breath there.

No, but seriously, when Ireland gained its independence they turned to the people who had stood by them as they were killed for using their language and religion: the Catholic church. When the people who dictate your morality also make your laws it really stifles any ribald behavior.

For example, here in Ireland – and not so long ago – you couldn’t even purchase a condom. Families were big, marriages were made young and, let’s face it, Irish weather has never encouraged miniskirts or midriff-baring tops. But despite the priests in political power, rampant morality and layers of clothing, any visitor to Ireland in the past century could tell you that flirting has always been the national past time.

Now, what you and I might call flirting the Irish could consider normal conversation. It’s a multi-generational, gentle teasing meant to solicit a person’s wit. People of the same age flirt, sure, but here in Ireland it’s not unusual for a young person to be sitting at the bar trading sly compliments even with someone their grandparent’s age – and what harm? It’s not meant seriously because the conversation is its own reward.

The thing is, this behavior is often lost on visitors. The assumption here used to be that, outside of formal arrangement, romance simply didn’t happen. To put it a different way: casual sex in Ireland has never been the recreational sport it is in, say, Los Angeles. So if an Irish person is flirting with you it’s probably harmless.

As Queen Elizabeth I could have told you back in the 17th century – if an Irish person is ever straightforward with you, it’s probably some form of irony. The real communication in Ireland has always happened in the margins and the subtext. No big surprise that their romance follows suit.

The other big surprise, especially for visiting men, is the phenomenon that is the Irish woman. Irish women are not shy. Irish women are, unlike their sisters from many other nations, definitely not afraid of men. There were no suffragettes in Irish history; they never needed them. In Ireland, the women used to lead the armies into battle . . . if it came to it, I’m sure they still could. This will be apparent to you, foreign male, the first time one of them matches your gaze on the street, approaches you for conversation or buys YOU a drink.

In all my travels I have never met a more empowered, self-assured female population as there is in Ireland.

Perhaps because of their female counterparts, the Irish male tends to be a lot more conversationally-oriented. He is used to needing to impress women with his wit and will probably strike you, foreign female, as quite clever. He’s not going to work as hard on his big muscles or external appearance – he already knows that women like men (the Irish female made this abundantly clear). He knows the woman is out looking for him and his best bet is not to work on attracting her attention, but on keeping it once she starts talking to him.

This is part one of a two-part article on sex in Ireland. Read the second part here.