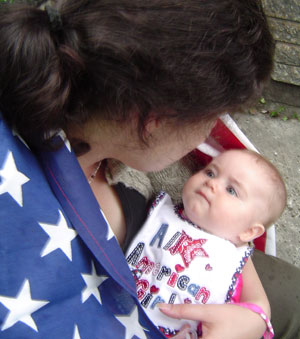 Yes, today is the 231st birthday of the United States of America.

They say that today there are more Irish people in the US than in Ireland itself. Be that as it may, the US would certainly be a different place without its Irish. The most wonderful thing is that after all the years of the Irish pursuing an Irish-American identity, there are now a few of us swelling the ranks of the American-Irish here on the shamrock shores.

For the past years, we have always done something on the Fourth of July.

The picture there on the left of wifey and the munchkin is from the picnic last year. Our first year there was a massive BBQ in the countryside. A bunch of yanks who worked with a friend of ours came down from Dublin. Fireworks were procured from across the border (fireworks are illegal in Ireland, to purchase them you need to head into Northern Ireland and hope the gardai don’t stop and search your car on the way back) and a couple kegs of microbrew were collected from the Dublin Brewing Company (you cannot, like the states, just get a keg from the supermarket in Ireland – you have to know a publican or something). It was awesome.

We even had a French expatriot attend the festivities dressed as La Fayette and gave the obligatory snide remark,

“By the way, you’re welcome for all the independence.”

Come on the French!!

In any case I have to say, this year it really snuck up on us. All the flags and decorations are in a box somewhere in the upstairs closet . . . I feel so ashamed. It’s like an Irish ex-pat not celebrating St Patrick’s day – it just feels wrong.