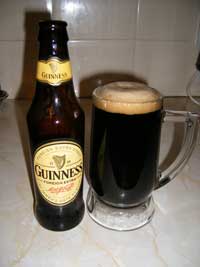 Yeah, we’ve all been there. In any case, Guinness’ ads are happy to tell you their “black” beer, despite its intimidating appearance, actually has less calories and less alchohol than Budweiser. So, while it might look like the manlier beer, Guinness draught stout is actually smoother, lighter and, well, not even close to the type of beer that will leap out of its glass to wrestle you under the bar.

No matter how many times I say it, people are constantly astonished that there are different types of Guinness. Furthermore, the Guinness you get today in the bar on draught is different than the traditional Guinness Extra Stout enjoyed prior to the 1960s. That “old-style” Guinness is no longer served on tap, but is still available – you can find it in the bottle or can with the characteristic, old-fashioned-looking, round, yellow label. The widget cans, rocket bottles and draught Guinness products are all the new recipe Guinness Draught.

The “Extra Stout” of your grandfather’s day is a different beer.

Would you believe I was almost beaten by some US tourists once over this? The incident still astonishes me. Why they would care so much is beyond me, but I opted for a hasty retreat from their presence rather than “take back” what I’d said as they flourished a bottle of each type of Guinness in front of me.

Chris and I used to wonder whether this beer actually existed. We had each been to some tropical locations and had a bottle of what we thought was “regular” Guinness Extra Stout, but had also noticed on the label its alcohol percentage being around 7.6% – ridiculously high. The taste did not bely this fact – the Guinness was definately stronger.

Finally in Italy one summer I located a bottle of the stuff – slight difference – the label reads Guiness FOREIGN Extra Stout. And yes, through a small bit of research, I found that I had discovered yet a third type of Guinness.

Guinness Foreign Extra Stout was invented by the Guinness brewers to ensure their beer could survive the long trip to far-flung areas of the world by boat. In order to do this, it continued to brew longer, creating a much higher alcohol content and flavour upon arrival. Obviously, the folks on the receiving end got used to the flavour and now, even with modern means of shipping, Guinness Foreign Extra Stout is still being produced.

It used to be you could only find it at certain places in the southern hemisphere, but lately the folks at Guinness have begun marketing it world-wide as a strong bottle of Guinness. It first appeared in Ireland a few years ago.

So, if you’re looking for the black beer that will make the attempt to wrestle you under the bar – this is it: Guinness Foreign Extra Stout, 7.6%.

Can you say, “Guinness is Good For You?”