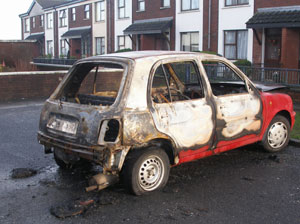 What is it about the new year that sends people mental? Judging by the local area, setting cars alight is on several people’s new year resolutions list.

Pictured on the left is the remains of the Nissan Micra which was burnt out in Athlone recently. As of yet, nobody has been charged in relation to the incident and Gardai say they’re looking for any witnesses.

This car isn’t the only one in the area lately. A local paper has eye witnesses to a car set alight on New Year’s eve stating, “There was a hive of activity when the car went on fire with fire brigade and Gards all on the scene.”

I mean, we all see cars blowing up on television and drive past unfortunate tragedies on motorways, but setting cars on fire for the craic? I fully sympathise with those social environmentalists who feel that cars are both destroying individual and community life, not to mention their negative impact on the environment, but surely these aren’t the folks indulging in auto pyromania.

Let’s hope these are isolated incidents having more to do with drunken festivities than a new form of Irish recreation.