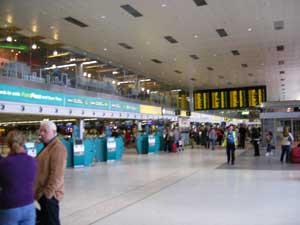 When Aine Casey stepped off her Aer Lingus jet today in Dublin airport, she made history as the 20 millionth passenger within a year to do so.

The powers that be greeted her with a bottle of champagne, a bouquet of flowers and a gift certificate for €3,000. I have written about the strange things that can happen when visiting Ireland’s largest airport, but this has to be surpassingly more strange, and wonderful, for Aine. I wonder how they determined exactly at which terminal the 20 millionth person arrived? Were they standing at the door with a little counter, or did they know before she walked in that she was the one?

Dublin Airport, as airports go, is not a large place. The entire departure/arrival hall is one long building that can be crossed in less than a minute. Beyond the gates, they place is significantly larger, it’s true, but large or small, 20 million passengers is the equivalent of the entire current population of Ireland passing through Dublin Airport 5 times each.