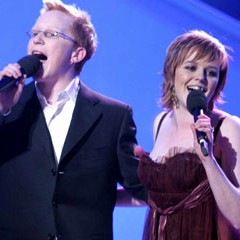 I opened up a paper today and saw Donna of Donna and Joe eurovision fame. Donna and Joe are a brother and sister from Athlone who represented Ireland in their failed eurovision attempt in 2005. Their Uncle, Paddy, is a local businessman who runs The Shamrock Lodge and also acts as head of the FAI.

Apparently, our girl is over in UK starting a new career as a television presenter for the BBC’s Children in Need drive, which, from what I can read on their site, is a charity organisation for UK children who suffered hardships, difficulties or disadvantages of some kind”.

Donna and Joe were subjected to some pretty serious taunting, including a musical appearance on Podge and Rodge where the two horrified lads quickly cut to commercial within seconds of Donna and Joe beginning to sing.

Donna is quoted in the paper as saying, “It kind of started afresh over here. Nobody even knows I represented Ireland in Eurovision with my brother.”

I can almost hear the exhalation of relief after that last statement.