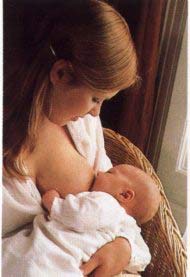 Well, it’s Irish Breastfeeding week and, seeing as how I have some personal experience with the Irish attitudes toward the topic, I thought I’d share them in case any of you are planning an Irish trip with an infant.

The good news is that Irish people LOVE babies. You will be stopped on the street and told how beautiful your child is. People will talk directly to your child as if he or she can understand them. Women will accuse your baby boy of flirting with them. Your baby girl will be the recipient of numerous offers of arranged marriages. Your baby will be welcome everywhere: hotels, restaurants, pubs (up to 7:30pm in most pubs, though rural pubs can be more lenient). The long tradition of large, catholic families has ingrained into the Irish an acceptance of the presence of babies in everyday life and, in general, they love them.

The not-so-great (and kind of unexpected) news is that Irish people, in general, do not breastfeed.

According to a recent World Health Organization survey, Ireland has the lowest percentage of breastfeeding mothers in Europe. This IS changing, thanks mostly to things like this, the second annual Irish National Breastfeeding Week. I’ve noticed that, in reaction to the negative attitude, breastfeeding Irish mothers tends to be a bit aggressive, whipping the aul boobies out in public squares, busses, conventions, batmitzvahs, concerts and political events and as if they HOPE someone is going to take issue with them doing so in public. That might sound obnoxious out of context, so here’s some context:

A girl I work with recently had a baby. She asked me whether my wife was going to breastfeed, explaining that she herself hadn’t because her mother and grandmother had said, scornfully, “You’re not going to do THAT, are you??” True story.

Here’s another one: On a radio show here recently the DJ was discussing (of all things) bringing one’s dog to a restaurant. A woman who takes her dogs to her local restaurant to eat their birthday dinners off the table rang in. Amidst other caller’s protests that what she was doing was objectionable, she exclaimed in her defense, “Well! It’s not like I’m breastfeeding in public or something!” I was so incensed at her comment that I broke a personal rule and actually rang the radio station.

It would seem that after centuries of Catholic morality lessons, the Irish sensibilities have turned breastfeeding into a shameful and unquestionably socially inappropriate activity. Almost no one out here was breastfed as a child and neither were their parents. The thing is, as a member of the European Union, there are certain external pressures on Irish society. One of these pressures emerged with that W.H.O. survey. If Ireland wants to continue to receive EU subsidies for their healthcare system, they need to toe the line on certain health issues, such as breastfeeding.

So, the Irish government has initiated a HUGE push to promote breastfeeding. It’s being discussed on the news, in the papers and on the radio. In the ward at the hospital where our munchkin was born, the walls were plastered with posters and leaflets on breastfeeding’s benefits (my personal favourite was the one where it was zoomed in on an attractive girl’s chest in a t-shirt reading “The Best Milk in the World – See inside for details” One has to wonder how that jives with the sexualization of the breasts that led to the Irish aversion to breastfeeding in the first place). Personally, I think some statues of the Virgin Mary breastfeeding baby Jesus would do the trick for Ireland . . .

At the end of the day, if you’re a breastfeeding mother planning to visit Ireland, do your thing, honey . . . just keep in mind that the infrequent scornful looks you may get come from folks who were raised in a different way of thinking.

Give ’em a smile and remember you’re doing the best possible thing for your baby.