I was in Sean’s Bar recently and met up with the three strangely dressed people pictured above. They are travelling journeymen from Germany following an ancient tradition wherein apprentices to a trade must travel for three years seeking work. At the end of the three years, they must return home as they left: penniless and with nothing to show for their years of working. Their clothes are part of this tradition and they also carry a walking stick (which is a friendlier replacement for an older tradition of wearing a sword).

Also, if you touch one of their hats, apparently, you have to kiss them.

Sean Fitzsimmons was intrigued by them and began to tell us about something similar that used to happen in Ireland.

Travelling Irish farm workers called spailpíns used to travel the country seeking work. They were always given lodging by the farmer; a hay loft in the summer and a special trundle bed kept next to the fireplace in the winter (the warmest bed in the house, he added).

At this point Sean explained that Sean’s Bar still has one of these beds and pointed over to the bench next to the fireplace. The three journeymen stood and, lifting the cushions, discovered that the old bench was indeed one of the box beds Sean described. 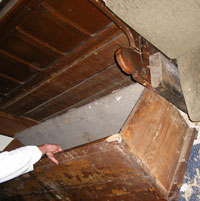 I know that Sean’s Bar is the oldest pub in Europe, but after four years of frequenting the place it still has its surprises.