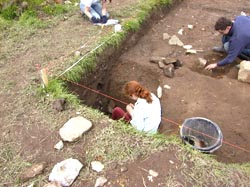 That’s right: 7,000 B.C. That’s before pre-history, folks. Apparently the findings from a dig in Abbeylara, County Longford has revealed a settlement of people long before humans were known to be settlers.

Among what they found at the Lough Kinale dig were a frequently used hearthstone which seems to have been the centre of the settlement, the first evidence of cattle husbandry, boar, deer and dog remains, evidence of frequent cooking, Wilma-Flintstone-like clothespins made from bone and unusually, for a waterside dwelling, an amazing lack of fish or bird skeletons. They scientists also found a “carpet” of hazelnuts.

Faced with a waterside settlement that seemed to have very little to do with fishing, the scientists have suggested that Ireland used to be heavily forested, and that if humans wanted to see the stars, they would have to live near a large body of water like Lough Kinale. Now! There’s evidence that the pre-pre-historical Irish were every bit as romantic as their modern counterparts.

How’s that for your Valentine’s thought for the day?

The findings were announced at a local presentation by Swedish archaeologist Dr Christina Fredengren (who led the dig) and will be collected for a two-book set whose release date has yet to be announced.

You are where you are.

That will be all.